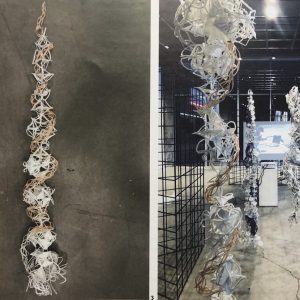 We are happy to see, that the great work of the MEF University students has been published in ARMIM TEMMUZ-AGUSTOS 2018 – in addition with interviews of all workshop partners. Its a very interesting publication.

Here the full interview in English:

1-The title of the workshop organized last week in Istanbul by Mef University and that you gave together with Alper Derinbogaz was “Future Epigraphs”. And the idea was “rethinking the city as a future fact by projecting new multi-layered urban paradigms”. What was the most speculative scenario?

This is hard to say, since we just had 2 ½ days. I do not want to talk about a particular scenario, but about the transferred knowledge of how to create complex 3D shapes from simple 2-D patterns. Certain forms that could easily be produced in the near future by mass customization processes as the basic structure for “super slenders”, a new type of skyscraper that responds to the economic pressures of land value and social housing needs.

New production possibilities, IoT and AI are transforming the urban fabric in which architects and planners are operating. It’s a transition, but I do not think that’s a paradigm shift. However, we need to create a new consciousness of these technological extensions of the human body when we talk about future urban planning. But to answer your question about the most speculative scenario, I think that it is all the work produced by the amazing students that resulted in a “total work of art”. The generated and transmitted knowledge as result of the workshop triggers me happy.

2-Last year you were selected as one of the “Europe 40 Under 40” that is given to most promising and emerging talents in Europe in the fields of design and architecture. What is the meaning of that selection for you?

Since the prize is awarded only to architects under 40, this is a conclusion for a certain time, which is therefore a bit sad. Sometimes I get the feeling that the older you get, the harder it is to preserve a “childhood” that then becomes visible in the architecture. I thnik this can be seen in the projects “Anthropometric Pavilion” and “Der Feldweg”. If one considers all “hard facts” from the beginning, one often loses the charm of architecture. The price of 40under40 encouraged me to continue as before. Also I would never have thought to find new friends by such a distinction, which was only possible by an active community. Special thanks also go to Mert Eyiler and Zeynep Aydemir, who organized a debate on architecture and housing at the RCA in London and Benjamin Michel, who has organized an exhibition in France.

3-What is the most emerging question in the future of cities?

In recent years, novel information, communication technologies, and man-machine-interfaces have advanced at a prolific pace. Certain technologies, such as Internet of Things and digital prefabrication, have been intensely developed as spatial conditions for growing cities. Data, robotics, and artificial intelligence constitute the conglomerates that are leading us to novel possibilities for how we, as humans, interact with technology within our environments. This leads consequentially to a few core questions which needs to be addressed. For example, can humans adapt to this transition by developing a new consciousness? What does human participation mean in the age of AI? In the near future, architects and urban planners will face an enormous challenge of adaption and integrating human and non-human real-time data for decision-making processes. I have elaborated on these questions in my PhD “Conscious City Laboratory – Explorations in the history of computation, cybernetics, and architecture: Foresight for artificial intelligence and human participation within cities”, which has not been published as I still have to defend it (disputation).

4-You are dealing with the boundaries of different artistic discipline. What would be for you if it wasn’t architecture?

That would be music, composition and the exploration of new soundscapes. Unfortunately, there is not much time right now because my family has absolute priority. The architecture itself takes a lot of time, but without family support, I would not be able to do what I do.

5-What would be the best alternative housing solution in response to the new type of living that requires pragmatic, sustainable, mobilize solutions?

Hybrid programming – Programming is essential to architectural design. Hybrid programming constitutes the mixing of use and embraces the multiplicity of modern life. Housing, commercial zones, power plants, cloud storages, and urban farms can merge in new forms of buildings. Even industry with Industry 4.0 can be next to housing, as long as emissions are within policy guidelines.

6-What is the place of speculative, conceptual and experimental design in dealing with real life issues?

I am not sure if there is a special place. I rather think we need to develop a special consciousness for  this. Filter bubbles, echo chambers, false news, and post-fatal conclusions are omnipresent in the digital age. This raises the question of how we can protect ourselves spatially and treat the symptoms of disinformation at the same time. I would like to refer here to a project of mine: “crisis intervention space”. The design shown visualizes a machine that creates a narrative place that breaks the boundaries of filter bubbles and echo chambers – a crisis intervention space. The surrounding nature here is the reference to the omnipresent real and virtual space. People should not accept everything as given, but should be educated to think independently; Therefore, the “index patient” is the observer of this work. Even Le Corbusier concluded that architecture can be created in the mind to give the possibility to trigger additional systems and thought experiments. Man is always part of the system.

7-What is the most exciting and even mind blowing thing that is created out of the accelerated collaboration between technology and design / architecture?

This is an interesting question, because it might be an intention, that certain technologies are shrinking, hence disappearing from our seen environment, which doesn’t mean that they are not active. Also it relates to the fields of digital arts, something which only a few knew about ten years ago. As in the age of constant media streams, I am listed in many blogs related to technology. Most posted tec’s are gone within seconds – you often think, hey wait, that’s a great idea, but then, a year later, nothing has happened. One thing that sets me apart is how real-time data, sound and performances mix with a light show, like that of Plastikman / Ritchie Hawtin or Alva Noto / Carsten Nicolai. This is possible today with software like Derivative Touch Designer or VVVV. I find it amazing, and also for students, to learn how to create and design space with visuals. Or the works by Philip Beesley. His alienating landscapes as living environments controlled by microcontrollers and sensors are stunning and are creating a new awareness for the observer of the artwork. But then again, there the pioneers of the information aesthetics, like Kurt Alsleben, Gui Bonsiepe, Oskar W. Beckmann or Frider Nake, just to name a few, who were working in the field of computer arts already 50 years ago and produced from my point of view mind blowing works.

8-There are a lot of movies that draws attention to future of living and most of them presents a dark future. How would you describe yours?

I must acknowledge that the human capacity to be critical is a uniquely human gift. Some people assert that mankind is future-blind by nature, and that human behavior has been categorically defined by history; however, I do not agree. Indeed, we can change through the use of our brain, and not only through machines. Personally, I believe that the future of human beings cannot be found within machines, but rather lies in the control of our brains. I do love dystopian movies, but in the end I believe in a bright future, because otherwise nothing in my life would make sense at all. I also believe that my children will live in a better world than we do, but we need to work together on it.