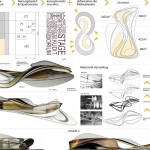 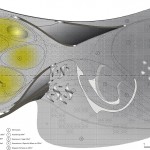 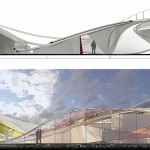 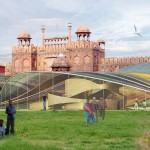 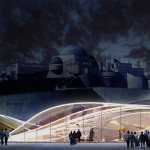 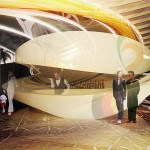 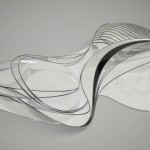 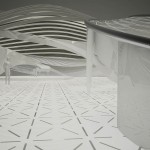 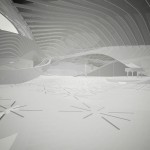 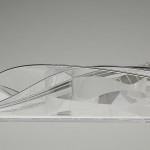 The Anthropometric Pavilion (Anthropomorphic = of human shape) develops its form language from the symbiosis of the Modulor developed by Le Corbusier combined with the Moebius strip (by Johann Benedict Listing and August Ferdinand Möbius). The Modulor understood itself as bridge of the imperial and the metric system; the idea is bound up with the “Möbiusband” as endless Feedback Loop. Therewith it sets a harmonizing bridge between Germany and India. Besides Le Corbusier stands for an early co-operation between Germany/Europe and India.

A special characteristic is the colour of the Pavilion, which are realised by a LED net mounted on the membrane. The LED net will illuminate moving pictures with colours of the Indian, as well as the German national flag. Thus the idea of the “Infinite Opportunities” Logo is taken up and visually integrated in the design.

The Moebius strip divides the Pavilion into two central amorphous regions. The main area with stage, auditorium, bar and a small kitchen. The second area is ” modifiable area”. This serves as an “open air” Stage, or if necessary, it can be divided into small information booths for different agencies.

Both areas are separately accessible, so that a separate operational sequence of meetings would be possible.

Since it is not yet clarified, where the Pavilion will be constructed, consciously an organic sketch was selected, which can react by its entrances to different urban scenarios, without acting as a disturbing foreign body. Supplementing also the flowing transition between interior and exterior space through terraces

Pipes, which are bent by CNC technology, form the basis of the construction. The second Layer consists of membranes, which become strained between the pipes. By creating a larger distance between the pipes, the membranes themselves will “stretch into form” and create therewith a rigid horizontal structure. ” The membranes draw the Design in Form”. The construction process is close to a tent structure and can be realized without mechanical help. Another advantage is the minimal storage for the dismantled structure, which also leads into an easier transport.

The pavilion is, through the use of innovative materials, up to 99% recyclable. The modern developed membranes are compostable; the foundation is built in concrete. The pipes are designed in aluminium, which can be later reused. Only the technical equipment would needed to be disposed.