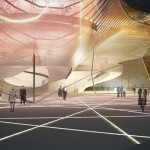 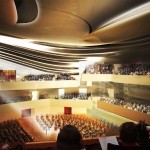 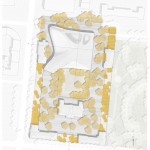 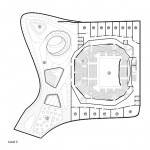 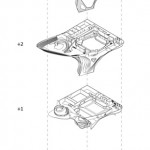 A concert hall is a place to meet, to see, to be seen, but as well a place to find the calmness to enjoy music, to celebrate and to orchestrate. The Sinfonia Varsovia will need to perform under all these criterias, as well as excel in its role as a public space that becomes part of a new vibrant urban place and delight all citizens of Varsofia with fantastic music, spaces and an exciting architecture. We set out to create a sinuous elegant public space that integrates the building within the historic setting, without compromising the contemporary dynamic architecture. One of our main concepts for the external urban strategy was to keep the axis created by the main green square and hence creating strong connective views. Adjacent to the existing building in the west, the Sinfonia gently turns out of the symmetry to cantilever over the existing building, creating a view-axis over to the Terespolska street – an inviting gesture to draw visitors in without obscuring views to the adjacent Park Obwodu Praga Armii Kargowig. The main entrance is located in the north west corner, allowing the view to a dramatic suspended curve-linear staircase, voluptuous meandering through the building.

The building in the day is a stereo-metric volume, underlining the new presence in the historic context – at night though the facade reveals a playful light circulation that allows a gentle wandering through the foyer. As calm and unspectacular the building appears at day, the building volume turns into a lighting parade at night, revealing its metropolis character. Within the Sinfonia, we spend particular attention to the integration between the concert hall and the foyers, creating and interwoven multilayered construct that reveals itself to the visitor along a procession like ascend into the vineyard concert hall. The entrance hall itself is a glass volume intersecting sharply the curved main volume of the main sinfonia and creating a large interstitial public space over two floors. The Sinfonia becomes a meeting place, a public foyer and an invitation to national and international visitors, facilitating concerts as well as a public program during the year.

The concert hall itself reveals the aesthetic fluid curvilinear essence of the interplay of formal sharp and clear lines as well as the warm and gentle soft flow. The building is in constant dynamic reaction to its environment, playing with the hard symmetry of the urban set-up and the fluid characteristics of its orientation, circulation and programatic interfacing between the meandering foyer and the hidden exuberant concert hall.