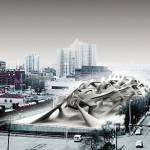 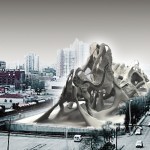 Life is all, therewith Nada Brahma. Like a rhizome all is connected in the structure / one body from the earth up to the sky. No shelter, just floating space; a spatial skeleton. It is a location for the mind; discussing like Plato under the same sun; creating a view according to Gersonides. Effected and infected by nature, which is so close to mankind, but nearly forgotten. A game between sun and shadow, like the blood of the Nightingale melting on concealed steel. The flesh and bones are experienced in an optimistic body that inhabits its own virtuality – its extended virtuality is its mode of being. The gates of hell are open, no need for Mescaline – looking beyond the conscious world.

The ‘Dead Bone’ is symbolizing the empty shell of bodies when the metaphysics entering the structure with their mind; this ‘squatting’ of the objects translates the structure of the changed object into a ruptured metonymized object – Referring to Heinz v. Foerster 2nd order of cybernetics: What is mind? Starting to investigate the system from being inside; inside are the meta-physicists acting as ghosts in the machine – the structure itself powered by various sources; creating a system operated by mind. Those pioneering minds begin to explore the idea of having a body as site; the technobody deconstructed through technology of reality. The senses are replaced, feeling the digital stream in the blood which is bouncing on the flesh.