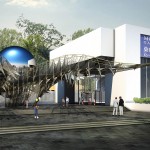 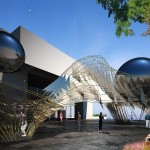 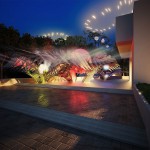 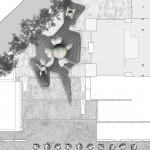 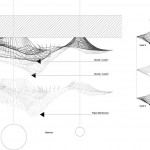 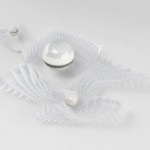 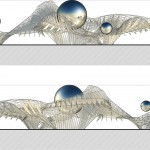 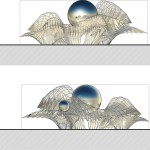 Gravity as force which effect every part of life and natural behaviour on our planet. Gravity is adapted in the formfinding process oft he structure, defined by two shells which are genretaed with two different loads. This generates already a stiff structure, but to finalize this, a connectional element is needed. This is done through little paper membranes. Combining this systems a stable shape is created. To secure it, each oft he three cores is based on a concrete foundation.

All materials needed for this structure are recyclable. The shells are based on a spaceframe out of Bamboo and paper.

The artificial elements are the three reflecting spheres. These are representing in a philosophical way the trinity of mankind – men, women and children – therewith the family. The refelction should acta s mirror and creates an awreness fort he observer that he and mankind is always part oft he system – part of nature.

To point out the role of human being those spheres are shaping the vault, they are central elements – this shows again how mankind is shaping his environment into a manufactured landscape.

At nigh the balloons are changing their colour with inbedded RGB Leds.

Beeing awre that this project can only be realised with sponsors, we have to put our emphasis on the commercial aspect, but on the educational as well..

Therewith it is planned to have a publication which shows how to construct a recyclable bamboo shell structure in short time, which can act as a pavillion in natural conflict environments. Everybody hast o have access tot he idea to create recyclable accomodation on low cost.